LEARN MORE
Themselves architectural icons, local churches, cathedrals, monasteries and kremlins (including those built prior to Mongol rule) furthermore contain Russia’s oldest religious art. Being among the most picturesque places in Russia, the towns of Golden Ring are a great route to travel if you want to enjoy the quiet and peaceful life in the Russian province, beautiful countryside views and ancient Russian architecture, and, of course, and learn more about history of Russia too.

There is no official list of which cities constitute the Golden Ring. Many old towns in the Ivanovo, Vladimir and Yaroslavl regions, including Palekh, Plyos and Shuya (Ivanovo Region), Gorokhovets, Gus-Khrustalny, Murom, Yuriev-Polsky (Vladimir Region) and Rybinsk, Tutaev and Uglich (Yaroslavl Region), consider themselves as part of the ring. But there’re the eight principal cities of Yaroslavl, Kostroma, Ivanovo, Suzdal, Vladimir, Sergiev Posad, Pereslavl-Zalessky and Rostov Veliky. If you would like to take a little break from the pollution, the cars and the noise of the capital cities of Russia for a moment, take a trip to the smallest towns of the ‘Golden Ring’, and you will get to see calmer, slower, more peaceful life walking around hilly countryside, and just have a rest. Suzdal, Pereslavl-Zalessky and Rostov Veliky are the best for such trip. And you also could be interested in going to the biggest places of the Golden Ring, just if you want to see true Russia and how the most of country lives, experience another, provincial way of life, not yet as much westernized, fancy, and hectic as in the big cities, with some relics of the Soviet times. Such towns as Vladimir, Ivanovo, Kostroma, Yaroslavl can get you a pick of the Russian province. Yaroslavl, which got its name from Yaroslav Mudry, who founded the town in the beginning of 11th century, is considered the unofficial capital of the Golden Ring and is also a UNESCO World Heritage Site.

It is a large industrial city, the biggest one of the Golden Ring (630 inhabitants), very interesting because of its history, architecture, and city life and dotted with onion domes like no other place in Russia.

Vladimir, with its exquisite churches and cathedrals, some of the oldest in Russia, used to be mediaeval capital of Russia in the 12th century. It fourished until a devastating Tatar-Mongol raids led to its decline and further to dependence on Moscow. It is the first stop along the Trans-Siberian route.

Kostroma, calm and inviting town located on Volga river, is, like Moscow, believed to have been founded by Yury Dolgoruky in the 12th century. Kostroma developed as a market town on the river and played a crucial role in the advent of the Romanov dynasty, as the first Romanov tsar – Michael Feodorovich – was here when he was elected tsar.
Rostov, known as Rostov-Veliky (Rostov the Great) to distinguish it from the larger Rostov-on-Don, is among the oldest of cities in Russia, having first been mentioned in chronicles in 862, while the history of the place itself started 4 thousand years BC, when the first tribes stayed hear. Its most impressive sight is the white-stone kremlin, coloured in the same delicate shade of pink as the sunsets it has been watching for hundreds of years. It stands on Lake Nero and is now a museum-reserve.

Pereslavl Zalessky is another ancient Russian provincial lakeside town, famous for its many monasteries, old churches, the toy flotilla build here by little Peter the Great on Pleshcheevo Lake, which has the status of national park from 1988.

Suzdal comes as a diamond of the Golden Ring. If you have only one place to visit near Moscow, come here – even though everyone else will do the same. Once upon a time local merchants failed to persuade the government of Russia Empire into building the Trans-Siberian Railway through their town. It went through Vladimir, and as a result Suzdal was bypassed not only by trains, but by the 20th century altogether. This is why the place remains largely the same as ages ago with its cute wooden cottages and golden domes that reflect in the river, bending sleepily through gentle hills and flower-filled meadows. 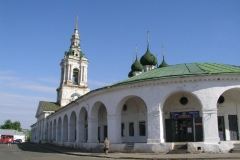 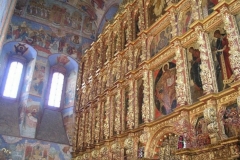 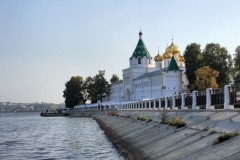 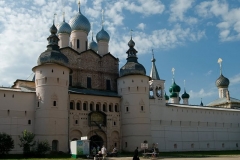 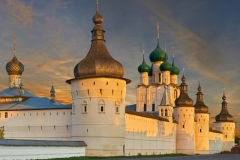 ROSTOV THE GREAT, THE KREMLIN 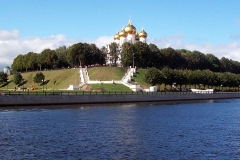 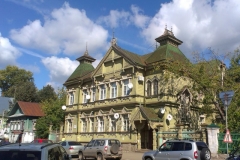 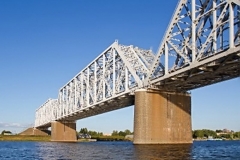 YAROSLAVL, BRIDGE OVER THE VOLGA RIVER 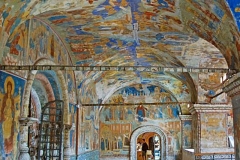 YAROSLAVL, PAINTINGS IN CHURCH OF ELIJAH THE PROPHET