The cruise route, connecting the 2 beautiful capitals of Russia, Moscow and St.Petersburg, is a great combination of ancient Russian cities, famous for their history, architecture and art. Medieval Orthodox monasteries on the river banks, beautiful countryside, cathedrals, rising from the water nearly intact in partially visible towns flooded during the construction of Soviet era dams, wildlife, giving motion to the passing scene and, of course, the two Russian capitals themselves will make the trip unforgettable.

The route can go in both directions along the magnificent Russian rivers and lakes including Volga, Svir, Neva, White Lake, Onega Lake and Lake Ladog, starting either in Moscow and or in St. Petersburg and passing through the beautiful and tranquil Russian countryside with stops in historical towns and cities along the way.

Uglich, Founded in 1148 (though a local tradition dates the town’s origins to 937), is one of the most beloved towns in old Russia. The town’s name is thought to be derived from Russian ‘ugol’ which means the nearby turn in the Volga River. By the 16th century, the city reached its Golden Age under Ivan IV the Terrible. At the end of the century, Maria Nagaya, seventh wife of Ivan the Terrible, lived in honorary exile in the Kremlin at Uglich. It was here in her garden that the Tsarevich Dmitry met his death and where the Church of St.Demitrius of the Blood was built and still stands today. Within the Kremlin is the oldest building in Uglich, the Palace of Tsarevich Dmitry.

Yaroslavl, stretching for 18 miles on both banks of the Volga, is an important Volga port and administrative center of Yaroslavskaya oblast with a population of 600,000. It was founded in the 11th century by Prince Yaroslav the Wise and today retains many noteworthy monuments of its colorful past. Yaroslavl has managed to retain a great deal of its 17th, 18th and 19th century urban substance and become a monument to the architectural development and style of the Russian Tsardom.

Goritsy is a tiny tranquil settlement with ancient monastery that capture the spirit of medieval Russia. In times past, this picturesque village near Beloozero was set in the center of one of the largest accumulations of monasteries in Russia. The first of Goritsy monasteries, the Kirillo-Belozerskiy monastery that dates back to 1397. The monastery prospered and became a refuge for many nobles during the Time of Troubles. It soon turned into a fortress which resisted the attacks of the Poles and Lithuanians for many years. The ornate buildings of the monastery have managed to preserve much of its historic grandeur and was recently named one of «The New Seven Wonders of Russia.»

Kizhi is a tiny island, located at the northern end of lake Onega and one of the largest open-air museums in Russia with beautiful wooden churches and other wooden constructions built hundreds of years ago without nails! Settlements and churches on the island were known from at least the 15th century. Nowadays, the entire island contains more than 80 wooden structures and is included in the UNESCO list of World Heritage sites.

Mandrogi is a small village settled in the 18th century on the left bank of the Svir River. The village was completely ruined during WWII and disappeared from maps for long years. Some 20 years ago a group of Russian investors bought the land and invited the best of the region’s woodworkers to use their creativity and traditional skills to restore the town to its former glory, the settlement was restored and many structures built according to the Russian fine traditions of wooden architecture and now the tourists can view what village life in Russia is like today and was like hundreds of years ago. 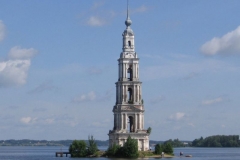 Belfry in Kalyazin near Uglich 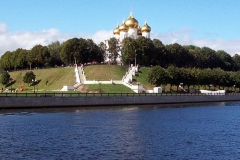 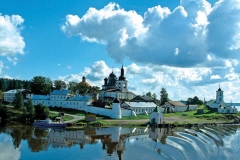 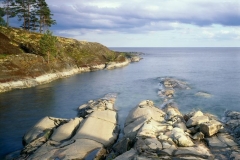 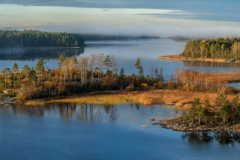 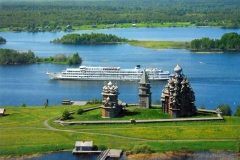 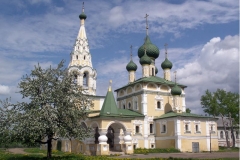 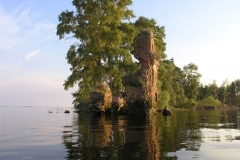 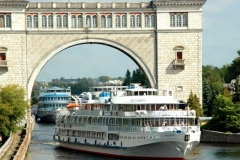 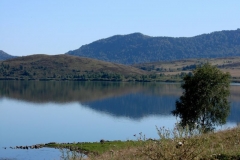 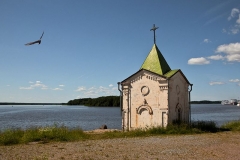 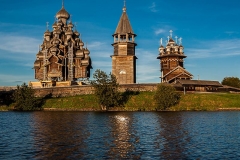 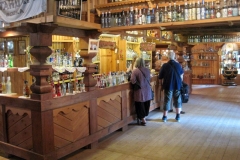 Museum of Russian Vodka in Mandrogi 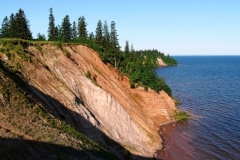 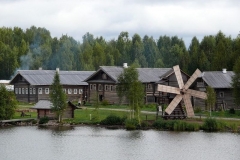